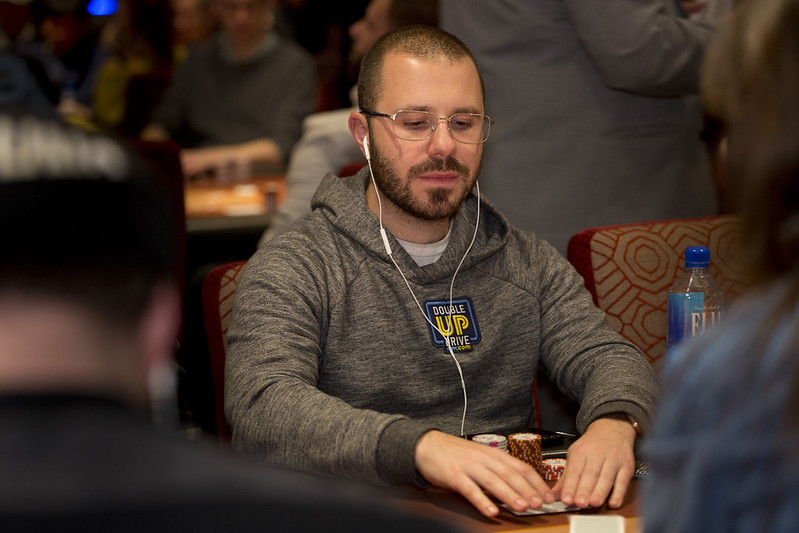 The poker world can certainly be a giving community. From players in need to charitable causes, poker players have been more than willing to lend a hand through the years. One of those successful efforts has been the Double Up Drive, the brainchild of high-stakes poker star Dan Smith (pictured).

Smith launched his charity effort five years ago as a means for poker players to give even more back to those in need and other causes for the betterment of mankind. The drive begins on Giving Tuesday, traditionally the Tuesday after Thanksgiving, and continues through Dec 29. Double Up has continued to grow and raised $4.5 million last year for 11 charities. 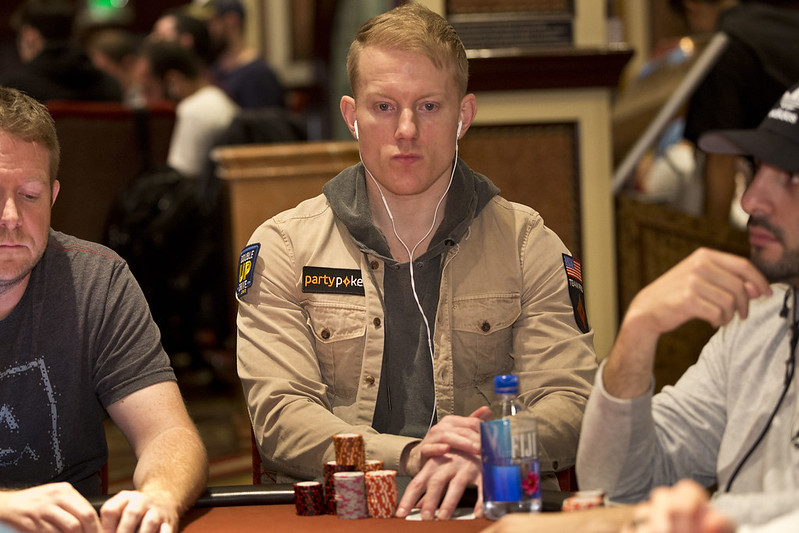 One of the most successful poker players in history with almost $30 million in winnings, Smith sported a DoubleUpDrive.com patch while playing in Day 2 of the WPT Five Diamond World Poker Classic on Tuesday at Bellagio. He gave out more patches to other players who supported the cause including High Roller peers Jason Koon (pictured) and Stephen Chidwick.

The charity has become a frequent topic at the tables as players make note of his patch, ask questions, and even contribute. Even poker legends like Phil Hellmuth and Erik Seidel have patched up for Double Up.

“The premise is that we have people who are donating large amounts,” he says. “If anyone interested chooses a charity, we will have someone who will match that donation. So just your $100 that you donate immediately becomes $200.”

Those matching the donations include Smith, Chidwick, Aaron Merchak, Matt Ashton, an anonymous poker player, and some Daily Fantasy Sports players as well. The project started small, but Smith soon realized he had a big endeavor on his hands after other players jumped in to further the cause.

“I saw that it was very impactful,” he says. “The following year I teamed up with Dan Colman. Each year it’s gotten a little bit bigger, and then the third year I publicly donated $175,000 hoping it would make a splash and get people talking – and it worked.”

That first year was met with skepticism that Smith would meet his goals, but as the drive became more successful more players have gotten on board. Last year, Fedor Holz donated $250,000 and other players have been supportive.

“It has really blown up,” Smith says. “I think it is totally embraced by poker players, and I’ve gotten a lot of support. Stephen Chidwick is one of our big partners this year. It’s really special to me to motivate someone, and motivating people with their wallet is great.”

And that list of donors doesn’t just include big-name poker pros with big bankrolls. One of the things Smith is most proud of is the number of players who’ve made donations at all levels. So far, 700 people have donated to the cause.

“I think some people think that you need to donate a lot of money,” he says. “People are living off of 65 cents a day in some parts of the world and we don’t even register that. But giving somebody a hundred dollars is huge to them. Twenty dollars is a month’s living.”

The late-year timing of the charity drive has a practical reason – it aligns well with those doing some end-of-year tax planning and some charitable giving might help in that regard. The efforts so far have been good and have raised millions of dollars since its inception.

When it comes to the poker felt, Smith is about as tough as it gets. Five Diamond is a particular favorite event after winning the tournament in Season XII for $1.2 million. He also has numerous other six and seven-figure scores.

At the third break in the action at Bellagio on Day 2, Smith had 85,000 chips after only one entry. The longer he’s at the tables the more he not only has a shot at winning but also the longer he has to show off his patch and discuss the charity efforts.

While some players may not have millions of dollars in poker winnings to donate, Smith notes that many may not realize just how big an impact even small donations can have. That small effort may not seem like much in the U.S., but to someone in a different country, it can be life-changing.

“Some people have brought up that they just aren’t very selfless and therefore really aren’t interested in charity,” Smith says. “I think almost everyone cares about themselves more than random people they’ve never met. But to what degree, when your money might go 1,000 times further for somebody in Uganda than yourself. So you could be not especially charitable and still rationally decide it’s a good thing to do.

“I think people really underestimate how much it takes to make a difference. I think most people can make a profound difference in the world without impacting on their quality of life.”

To donate to the cause, visit DoubleUpDrive.com.

Sean Chaffin is a freelance writer in Crandall, Texas. His work appears in numerous websites and publications. Follow him on Twitter @PokerTraditions.

Looking to win your way to a World Poker Tour event for your shot at becoming a WPT champion? Play for your chance on ClubWPT.com, where eligible VIP Members can play for over $100,000 in cash and prizes each month, including seats to WPT events, no purchase necessary.