The first WPTDeepStacks tours run in partnership with 888poker have concluded as both WPTDS Iberia Online and WPTDS Italy Online reached their climaxes last night, with winners crowned in the Main and Mini events on the Portugal and Spain, and Italy networks.

The WPTDS London Mini Main Event also reached a conclusion last night, which means that 47 titles in the trio of festivals have already been awarded… but who will win the 48th? We don’t have long to wait as the WPTDS London Main Event will crown its champion this evening, and the $1,000,000 guaranteed event will be live streamed so you don’t have to miss even one minute of it.

Last night, two further Day 1 flights took place, bringing the running total number of entries up to 882. Of those, 155 progress to Day 2 this evening, with the finale of the WPTDS London getting underway at 19:00 (BST).

The current Top 10 stacks are listed below, and there was only one new entry from yesterday’s events – Zebest7r. The Canadian enters the leaderboard in 8th place and will bring 135,948 chips (68 big blinds) through with them when they return.

KostenBerguz who is ranked 9th at the moment also made it to the final table of the Mini Main Event (see below for more information). It would be quite something if the Ukranian could make it two for two. They return with 131,032 (66 big blinds). 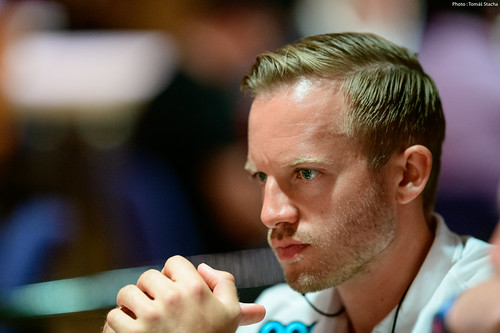 One big name who is chipped up is Martin “MJacobson888” Jacobson. The Swedish star who plays from the UK bagged 97,866, which is currently worth 49 big blinds.

There are three 888 Ambassadors still in with a shot too: Dominik “888Dominik” Nitsche (70,800); Chris “888Moorman” Moorman (49,376); and Sofia “sofialovgren” Lovgren (30,028), who are all certainly ones to watch despite the latter returning with just 15 big blinds. The Swedish pro has already locked up a few final tables to her festival resume, proving she is on excellent form right now.

There is just one more shot for hopefuls to secure themselves a seat in today’s final. That begins at 16:00. For players looking for a more affordable route to the Main Event, there is a $27.50 rebuy that starts at 14:31. Only those who are in, have a chance to reach the final table and take home a share of the seven-figure prize pool.

The payout information will be confirmed later today once late registration has closed on the last Day 1 flight.

Want to watch the excitement as it unfolds? Tune into 888pokertv on Twitch for live coverage at 22:00 (BST), where you will join players as they get ready to battle it out. Play will resume with Level 13 and blinds of 1,000/2,000 (250 ante). Each level will last 20 minutes, ensuring fast-paced action right the way through… and it won’t stop until we have a winner!

The Mini Main event attracted 584 entries, of which 456 were unique, smashing the guarantee with a final prize pool of $116,800!

It took eight hours and 38 minutes for a conclusion to be reached, and the heads-up battle between BrunoZika1 and Agsur_Seni brought play to a halt when the Brazilian picked off the last opponent to net themselves a WPTDS title and $21,362. No deal was struck so Agsur_Seni took the $15,487 second-place prize for their efforts.

Over on the Portugal and Spain network, the Evento Principal was closely fought between Juanmik15 and Pericopower, and that was evidenced in the deal agreed on by the two that saw Juanmik15 bank €19,557 for first place, with Pericopower winning €18,378 for their runner up result.

Both players represented Spain, and in fact, Spaniards dominated with all players in the Top 5 positions hailing from the Mediterranean country. Phelpi55’s took €11,775 for third, Pacolitri won €8,655 for fourth, and sutIplay214 collected €6,405 for fifth place.

In contrast, the Evento Principal Mini was dominated by Portugal, with all three podium positions going to the country. This time the event comfortably surpassed the guarantee, with 808 registrations (594 unique) contributing a total of €24,240 to the pot.

No deal was agreed between QuePasaChico and pdastinger, so the duo played it down to the end, with the former taking the victory and €4,193 in prize money. pdastinger’s second place finish was worth €3,059 and jf_minis banked €2,234 for making it as far as third.

The top five all saw a four-figure return on their investment – kaiseryklaus, and pelups410 took €1,631 and €1,199 respectively for reaching fourth and fifth places.

Over on the Italy network, the Italia Main Event mirrored its Iberian cousin. The buy-in and guarantee were the same, but this event proved even more popular and exceeded its guarantee after 1,348 players (1,191 unique) logged on to play.

With €152,720 in total prizes up for grabs, it was no wonder this epic event took half a day to play out, with a runtime of 12 hours and 2 minutes on the clock. The action finally came to an end when Favolosa88 picked off the last of their competition, eliminating derosa24 (€16,310) in second place to claim the €22,313 first-place prize.

The final title of the night went to Barrils11 in the Italia Mini Main Event. Once again, this event had no trouble beating the guarantee with €18,300 collected via 366 entries, with 294 of those unique.

The tournament lasted 8 hours and 48 minutes all in all, and though mirco4791 put up a valiant fight, they came unstuck at the final hurdle, to take the runner-up position and €2,680 in cash. Their departure meant the title, trophy, and €3,709 in prize money went to Barrils11 for their victory.