In the latest First Rounders we’re picking who may emerge as the 2023 PokerGO Cup Champion.

It’s the return of the high rollers to the PokerGO Studio in Las Vegas this week, as the 2023 PokerGO Tour season kicks off with the third annual PokerGO Cup. The schedule consists of eight five-figure buy-in No Limit Hold’em events taking place from January 11-19 and culminates in a final $50,000 high roller that will play to a winner on January 20. Players accumulate PGT points for results across every event and whoever finishes the series with the most points will not only take home the impressive PokerGO Cup but an extra $50,000 on top.

It’s pretty straightforward, right? Simply navigate past some of the elite minds in the game of poker in a series of some of the biggest buy-ins on the poker calendar in order to lay claim to the championship. Unlike the WPT World Championship, the criterion for coming out on top of this series is a bit different. A contending player should have an unquestioned skill, experience with smaller player pools, and, yeah, a very healthy bankroll if they have designs on hoisting the cup.

Unlike drafting a winner for a specific event, this edition of First Rounders will be selecting our picks for the overall champion. So let’s not waste any more time – let’s get into our First Rounders for the 2023 PokerGO Cup.

Roll your eyes if you must, but it’s really tough to pick against a motivated Daniel Negreanu. Not only has Negreanu done it before, winning the overall leaderboard of the inaugural PokerGO Cup in 2021, but he’s coming off an incredible performance in the WPT World Championship at Wynn Las Vegas in which he finished in 17th place for $176,200. But all of that is in the past, and the real reason to pick Negreanu is what lies ahead. If you remember back to the end of 2022, he was very motivated to crack the top 21 spots of the PGT leaderboard in order to make the $500,000 freeroll that was the PGT Championship. Well, this year, the PGT Championship is a $1,000,000 freeroll and Negreanu is coming for it – and taking on everyone who wants to make a bet about it.

I’m looking to make bets against any player of your choosing that I score more PGT points in 2023 than they do.

Let’s get this party started! https://t.co/FoWB82h1zi

He’s on record that he wants it all this year. Sure, it costs $165,000 in entry fees if you play a single bullet on every event ($260,000 if you fire every opportunity), but that’s going to be a small percentage of Negreanu’s buy-ins this year. Besides, he just won $3.3 million in the same studio a couple of months ago when he took down Super High Roller Bowl VII. So, sure, maybe he’s the overly obvious choice, but you try explaining why you passed up a hungry Negreanu when you could take absolutely anyone at Number One.

When you think about the PokerGO Tour there are a couple of players that instantly come to mind for how often they fire in PGT events and how well they seem to do in them. Sean Winter is one of them – he’s absolutely always in the mix, always on camera, and always a threat to win it all. From the moment he appeared on the high roller scene Winter has been crushing, and to date, he’s accumulated more than $23 million in overall recorded earnings, the majority of which he’s won on the PGT.

Last year alone, according to The Hendon Mob, Winter had 20 cashes in PGT qualifying events including back-to-back victories in the final two events of the 2022 U.S. Poker Open, awarding him the Golden Eagle trophy for the overall win. He wasn’t done collecting major PGT prizes either as he once again make impressive runs, including a victory, in the final events of the 2022 Poker Masters to walk away with the Purple Jacket as the overall series champion.

You get it – Winter knows how to win in the PokerGO Studio, and thus he is a favorite to add another poker trophy to his case here in the 2023 PokerGO Cup. 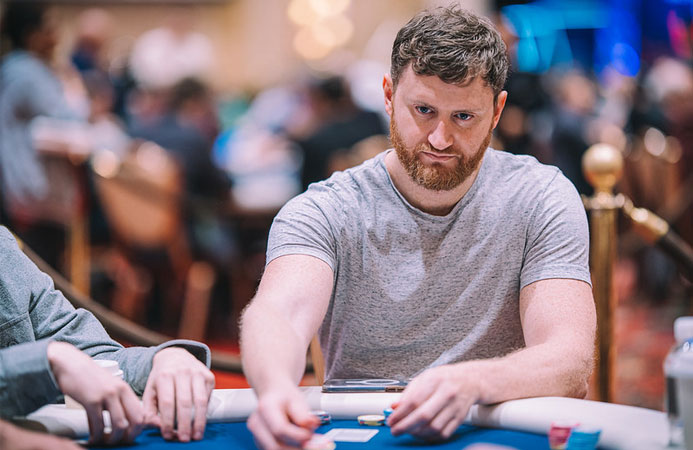 Another PokerGO staple, David Peters is coming off a victory in the WPT World Championship Progressive Bounty side event for $147,916. A nice score by most standards, but for Peters, it’s just another in a long line of career six-figure score that helps make up his more than $41 million in lifetime tournament earnings – good for seventh on the All-Time Money List. Peters, the back-to-back (2019, 2021) U.S. Poker Open champion, had a relatively quiet year in the PokerGO Studio in 2022, but that didn’t mean that he didn’t crush the high roller scene. He kicked off the 2022 World Series of Poker by winning his fourth career bracelet in the $100,000 High Roller Bounty for more than $1.1 million, and one week later found himself at another WSOP final table in the $50,000 High Roller, where he finished in fifth place for another $326,464.

He also booked back-to-back final tables in the high roller events at the 2022 Seminole Hard Rock Poker Open – a victory in the $50K for $407,545, and a sixth-place finish in the $25K for just over $100,000. The truth is, it doesn’t matter where the events take place, Peters is absolutely always a favorite to go deep at these buy-in levels. The only reason to hedge against Peters being a top pick is the question of whether he’ll show up for the $10,000 buy-in events to pick up points. Maybe he’ll just show up for the biggest buy-in events. Then again, if he does, Peters might just win them in back-to-back fashion as well, and walk away with the Cup.

Don’t sleep on the reigning, defending 2022 PokerGO Cup overall champion Jeremy Ausmus. Ausmus has always been a dangerous opponent, but the last 24- months of his 15-year career have been next level. In the midst of an avalanche of major five- and six-figure scores is the impressive performance that locked up last year’s PokerGO Cup title. Through the scheduled eight events, Ausmus cashed in four of them – all podium finishes. In total, Ausmus walked away with more than $824,000 in PokerGO Cup earnings to go along with his trophy. And you can bet that he’s going to be looking to create the same winning atmosphere in 2023.

Last year, Ausmus was 43rd in overall tournament results with more than $2.8 million in total earnings. But what makes that number so impressive is that it’s not padded by a single, massive outlier win. It was pure consistency throughout the year, including 21 PGT-qualified cashes. High rollers, mid-stakes, and even online results (which are not reflected in the above number) paint a picture of a now veteran grinder taking yet another step up in his career.

In 2021, Andrew Lichtenberger essentially bubbled the PokerGO Championship finishing the year in 22nd place on the overall leaderboard. However, that might be the only thing that went sideways for ‘LuckyChewy’ in 2022.

Lichtenberger found plenty of success inside the PokerGO Studio last year, including a victory in a Poker Masters $25K for $465,750. One week later, he finished in third place in Super High Roller Bowl VII for another $1.1 million. Add to that a win in the SHRPO $50K for $638,223 and a final table finish at the WSOP $50K (6th place) for $248,516 and Lichtenberger finished 2022 in the top 40 money earners for the year.

With a World Poker Tour title to his name, as well as a WSOP bracelet, Lichtenberger may have his sights set on a PGT leaderboard title to add to his trophy case. What gives him a slight edge is, like Negreanu, he’s proven to be willing to battle at all of the buy-ins. If he’s able, he’ll show up and battle for points in the prelims potentially giving him the push he needs when the stakes get even higher. He’s yet to crack the top 10 on overall PokerGO Cup leaderboard points, perhaps making him a dark horse pick, but his ability to close is without question. If he keeps his momentum from 2022 he could go from dark horse pick to triple crown winner.

In the category of “Who Loves It More?” Cary Katz might be a #1 pick. Katz (nicknamed “El Jefe” for a reason) essentially created the PGT due to his love of high-stakes poker and the intense competition that comes with it. And maybe he’s not deep in the solvers (maybe he is, who knows?) but that hasn’t stopped Katz from routinely performing well in the marquee PGT events as well as the regularly running small-field Aria High Rollers.

So what makes Katz a pick here over some other big-name crushers? Experience, patience, and knowing when to pick a spot. Katz is known to never get flustered, never get it in bad. Plus, he’s put up big-time PokerGO Cup results in the past including a victory in the 2021 PokerGO Cup Main Event for more than $1 million (a victory that secured the overall leaderboard victory for Negreanu that year). Katz also finished in fourth place on the overall PokerGO Cup leaderboard in 2022.

Look, if Katz had a passion for pizza and ball pits maybe this would be the Chuck E. Cheese Cup, but thankfully it’s not – it’s the PokerGO Cup – and it won’t be long before his passion for poker is going to pay off yet again with another PGT trophy presented to him in the very studio that he built.

Artur Martirosian headlines the final six players in the PCA Main Event, with the winner set to take home $1.5 million.

The long-time voice of High Stakes Poker announced his retirement from the show after the debut episode of Season 10.

In the latest First Rounders, we've got our sights set on the 2023 PokerStars Players Championship.

Ante Tim Fiorvanti A Look Back: Gus Hansen Cruised to Victory in the Very First PCA

As the 2023 PokerStars Caribbean Adventure gets underway, a look back at the history of the very first PCA main event, during Season 2 of the World Poker Tour.

Fresh off his first final table of 2023, Daniel Negreanu breaks down the value of playing high rollers and the state of his PokerGo prop bets.

They say all it takes to turn a lump of coal into a diamond is pressure and time. When all was said and done, Ravi Raghavan relied on both those ingredients to work his way through a star-studded final table. He defeated fellow WPT Champions Club member Shawn Buchanan heads up to claim the title…

At the final table of WPT Five Diamond World Poker Classic, which airs Sunday night on FSN at 8pm or 11pm local time, two of the most recognizable names at the table couldn’t be more different in demeanor. Antonio “The Magician” Esfandiari is an outgoing gregarious person at the poker table, while Andrew “LuckyChewy” Lichtenberger…