Alleged cheater Mike Postle made the final table of the Million Dollar Heater in Biloxi, Mississippi. 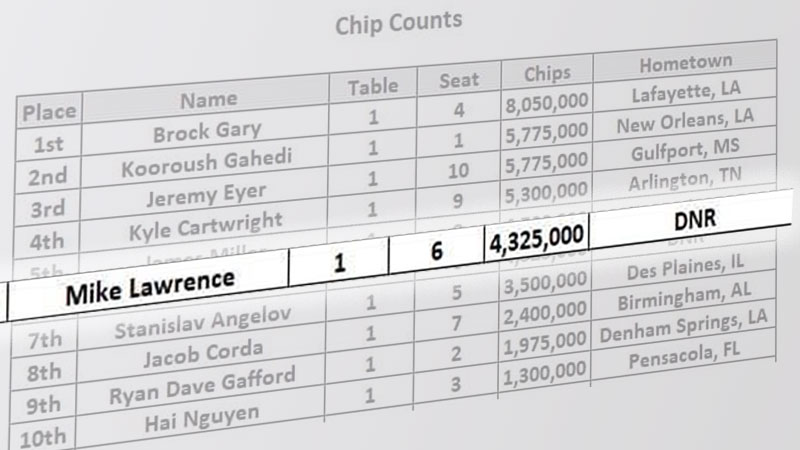 Mike Postle, who was accused in late 2019 of cheating over a stretch of more than a year on livestreamed cash games at Stones Gambling Hall just outside of Sacramento, California, has allegedly resurfaced in Mississippi.

In a social media post from poker player Angela Jordison, she revealed that her friend Maxwell Young, who made a deep run in the Beau Rivage’s $1,200 Million Dollar Heater main event, realized he had been playing with someone at the table that he believed to be Postle.

I woke up with a message from @Mawkswell

According to Young, Postle was recognized by one of the players at the table by his voice and his appearance. While Postle had been actively talking for most of the day, he put his hood up and kept quiet as the action got later into the night, presumably aware that his presence might have been discovered.

In the chip counts posted for Monday’s final table, a “Mike Lawrence” is listed as 6th in chips, with ‘DNR’ under the “hometown” column. Sources at the event have confirmed Postle’s identity, and a video crew has been on site following Postle over the last several days.

Before Robbie Jade Lew, Garrett Adelstein, and Hustler Live Casino became the talk of the poker industry for all of the wrong reasons, the Postle case was the biggest story in poker. Postle was accused in late 2019 of cheating over a stretch of more than a year on livestreamed cash games at Stone Gambling Hall just outside of Sacramento, California. Veronica Brill, who provided commentary for Stones Live for some of those streams, leveled cheating accusations against Postle in a series of tweeted videos she released online. Poker player and personality Joey Ingram soon thereafter began a lengthy run of shows on his YouTube channel breaking down many of the suspicious hands played by Postle at Stones Live.

Though Postle largely avoided significant legal or financial ramifications, a $330 million defamation suit by Postle that included Daniel Negreanu and ESPN, among many other defendants, went nowhere. Postle lost anti-SLAPP countersuits to Brill and poker player/media personality Todd Witteles for $27,000 each.

The saga cracked the mainstream media, including a lengthy story published by Wired, but Postle had largely managed to fade from the headlines in recent years – until Monday.

Brill’s reaction to the news of Postle’s return reflected the toll that the ongoing legal saga has had.

“I’m tired and exhausted of the whole thing, to be honest with you,” said Brill. “My mind has gone from happy that I did it, and we got him off the live stream, hopefully stopping him from cheating in the way that he was cheating. I don’t know if he still is [cheating] in other ways.

“But then there are other parts of me that regret doing what I did – because of the continual harassment. I’ve seen people involved who mentally were not doing well towards the end of it all. And nothing came of it, besides all the lawyers making money from all of the lawsuits. And now he’s just still continuing to do what he wants, which is play poker. There has never been any sort of consequence for him. He’s always gotten away with it. And the fact that the poker room is just OK with it is so odd to me.”

Brill intends to go after any money that Postle cashes for in the tournament in order to recoup the money she’s owed from her legal judgment against him, and she’s already been in contact with a local attorney in the area.

“There’s a lawyer that has reached out to me, and he’s got an office in Mississippi,” Brill said. “And he said that they’re going to file some paperwork to garnish anything Mike Postle makes from that final table. But we need to submit the paperwork quickly.”

Artur Martirosian headlines the final six players in the PCA Main Event, with the winner set to take home $1.5 million.

The long-time voice of High Stakes Poker announced his retirement from the show after the debut episode of Season 10.

In the latest First Rounders, we've got our sights set on the 2023 PokerStars Players Championship.

Ante Tim Fiorvanti A Look Back: Gus Hansen Cruised to Victory in the Very First PCA

As the 2023 PokerStars Caribbean Adventure gets underway, a look back at the history of the very first PCA main event, during Season 2 of the World Poker Tour.

Fresh off his first final table of 2023, Daniel Negreanu breaks down the value of playing high rollers and the state of his PokerGo prop bets.